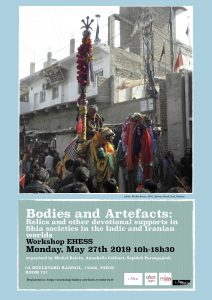 Presence in Absence: The Formation of Reliquary Shiism in Qutub Shahi Hyderabad

In this presentation, I will present relics as indexical forms of remembrance that are powerful manifestations of the “presence in absence” of the Shiʿi saints and Imams. Relics assumed a defining role in shaping a specific form of religious material culture that would find spiritual and political valence among the diverse religious and ethnic polities of the Deccan region of South-Central India during the Qutb Shahi period (ca. 1496-1687 c.e.). I show how the Qutb Shahi sultans encouraged the translation of Shiʿism from an essentially Persianate form into an Indo-Shiʿi idiom through several complex processes of translation and indigenization that transformed the ritual-devotional, literary, architectural, and reliquary material practices into systems that were mutually intelligible to a diversity of Hindu and Muslim communities, alike.

Pilgrimage certificate as instrument of devotion: example of the Museum of Islamic Art, Doha.

Dated ah 21 Muharram 837 (September 6, 1433 ce), the pilgrimage certificate MS.267.1998, from the Museum of Islamic Art’s collection in Doha, was made for a pilgrim named Sayyid Yusuf bin Sayyid Shihab al-Din Mawara al-Nahri, who undertook the ‘umra. With a length of 666 cm, it features the major Islamic sites, alongside inscriptions from the Qur’an and texts written in Arabic and Persian related to the pilgrimage with the name of the pilgrim and his six witnesses inscribed at the end. This presentation will aim at introducing the scroll’s textual and visual content and in particular its possible use as an object of devotion transporting the viewer to the illustrated sacred places and providing blessings through the physical contact with these images.

« From Sehwân to Masqat. Manuscripts of Sindhi elegies (marsiyâ) among the Lawâtiya of Oman »
Manuscripts containing Shiʻi devotional poetry, in particular Sindhi elegies (marsiyâ) of Sâbit ʻAli Shâh (d. 1800) of Sehwân on the martydom of Husayn (d. 680), were abandonded in the late nineteenth century by the majority of South Asian Khoja followers loyal to the Shia Imami Ismaili spiritual leadership of the Aga Khan. These manuscripts continue to be used, however, as devotional supports by the dissident Twelver Shiʻi Khoja minority known as Lawâtiya that settled in Masqat. In this paper, we will examine how these manuscripts become part of the Khoja satpanth religious tradition in South Asia and their contemporary role among the Lawâtiya of Oman.

A Neo-Fatimid Library in the Making: The Social Lives of Arabic Manuscripts among the Alawi Bohras of South Asia

The Bohras, a small but vibrant Ismaili community in India that is almost entirely closed to outsiders, hold a secret Arabic manuscript culture, which is enshrined and preserved in royal archives or khizānāt. This paper will investigate the materiality of the khizāna and the social role of its manuscripts. As secret objects that are part of a living manuscript culture, I argue, these manuscripts are central to the identity of the community. Beyond their function as carriers of knowledge, the paper will examine how the books of the khizāna are understood among the Bohras as devotional supports and relics, embodying the direct and unbroken link between the community and the Fatimid past.

Panel 2- Body and its imprint in devotional rituals

The foundation of the shrine of al-Husayn’s head in the last decades of Fatimid Egypt: its political and religious implications

One of the last Fatimid caliphs, al-Zâfir, transferred to Cairo the relic of al-Husayn’s head, previously discovered in a miraculous way in Ascalon by the Armenian Fatimid vizier Badr al-Jamâlî. In 1154, eighteen years before Saladin put an end to the Fatimid Empire, the shrine of al-Husayn was officially opened and its devotion was overtly promoted by the regime. Although our sources about this event are scarce, I will try to cast some light on the political and religious implications of the introduction of this Shi’i cult shortly before the final triumph of Sunni Islam in Egypt.

In Twelver Shia Islam, considering the plurality and multiplication of the venerated figures, the holy places are also innumerable. In this presentation, I focus on the places of devotion that are supposed to contain the bones (corporal relics). I will try to present them in a schematic framework and to discuss some factors (liturgical and emotional) for explaining the importance of some of them, as well as some aspects of their transformations and changes over time.

The body of the malañg renunciant and his emotions in the devotional rituals of Qalandarī (Sehwan Sharif, Pakistan)

During the ceremonies related to the commemoration of the martyrdom of Imam Ḥosayn and his companions, the bodies of actors and believers carry signs that identify the devotional figures celebrated. These objects (armour elements, weapons and sculptures) visually concentrate the story and figure invoked. In the theatre as well as on the banners, they represent the words declaimed, sung or inscribed that relate the drama. The objects worn and carried today are very similar to those identifiable for the Qajar period and are largely inspired for the costumes, from safavid period productions. Made of forged steel and damascened with precious metals, these objects show the durability of models with a strong visual identity and the recurring use of this metal for Shia devotional objects.

Panel 3- Circulation of Material Culture between Shiism and Sufism

Body in absence: the Mawla jo qadam in Sindh between Shiism and Sufism

A number of papers have been devoted to the qadam-e rasul in South Asia, or the Prophet Muhammad’s footprints which are visited by devotees. Amazingly, the scholars did not pay attention yet to the qadam-e mowla, namely places where Ali’s footprints can be found, or his horse’s footprints. Such sites can be found in many Sufi sites in the Indus Valley, although they can also be arranged as separate places of devotion, as it is the case in Hyderabad, Sindh. The paper will investigate how the qadam-e mowla can inform us about the interaction between Shiism and Sufism both in Shia and Sufi places of pilgrimage.

The ethnographic film ‘Shahbaz Qalandar’ explores the vital role of the Qalandariyya Sufi Order in the city of Sehwan’s religious life, in its relationship with Shia devotional culture. It deals with the diversified contemporary spiritual life and religious practices of the city of Sehwan in Pakistan, including the popular collective ritual at the shrine, the dhammal, and other aspects of Qalandari piety and popular culture, which are solely built around the tragedy of Karbala. The film screening will be preceded by a short talk on the structural commonalties of the Qalandariyya with similar communities in Turkey and Iran, such as the Alevis and Ahl‑i Haqq (Yaresan).